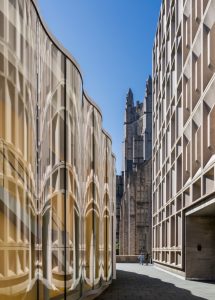 commonplace. Typical materials for these designs involve iron, stone, brick and even marble. Then, there’s the school’s Tsai Center for Innovative Thinking–a new addition to the campus—that features an unconventional aesthetic compared to the surrounding traditional architecture. A rippling glass façade displays a honey-colored interior, an obviously stark difference from the university’s signature Yale Blue. 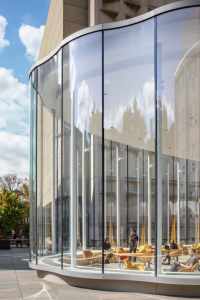 The Oval Innovation Center’s corrugated glass façade was designed by Weiss/Manfredi Architecture in New York. The exterior glazing was provided by China-based Tianjin NorthGlass. Massey’s Plate Glass in Branford, Conn., was the contract holder and installer of the facade system, which was engineered and fabricated by Fabbrica of South Windsor, Conn. Oldcastle BuildingEnvelope® provided the interior glass, and the project’s general contractor was Whiting-Turner. 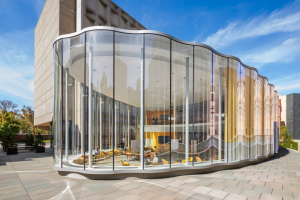 “In order to achieve the consistency of the outdoor color of concave and convex curved glass and the natural transition of multiple curved [radii], Tianjin NorthGlass has conducted coating debugging and color control many times and finally produced the coated glass that meets the performance and color requirements,” the company states in a press release.

“Curved transparent glass walls encourage circulation through and around the Center, and allow the rest of the university to see and participate in ongoing work. Indoor and outdoor connections between the Center and the adjacent landscape establish this section of the campus as a new circulation route and a new home for innovation,” according to Weiss/Manfredi.