This Sunday, one of the biggest games of the year, Super Bowl 2022, will host two home teams—but you’ll only find one on the field. The other will be in the stadium itself. 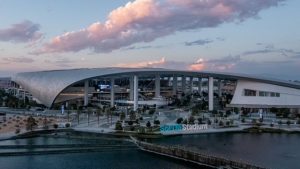 On Sunday, February 13, Los Angeles will host one of its home football teams, the Rams, against the Cincinnati Bengals in its recently completed SoFi Stadium.

The stadium shares its hometown with Giroux Glass, which completed the stadium’s glazing work in 2020.

“We were involved in the project for about two and a half years,” says John Cox, Giroux Glass’ director of California project operations. “I am glad to say Giroux helped build that. Watching that progress turn into a completed project day by day was one of the most rewarding parts of the project.”

Part of Giroux’s challenge to contributing to the stadium was working around the clock with thousands of other tradespeople.

“At a high point, we were probably close to 5,000 [tradespeople] and installers working on the project. That’s a lot of people to work around and get in and out of the stadium,” and people were working 24 hours a day for seven days a week, Cox says.

Giroux installed about 15,000 square feet of glass across five of the stadium’s eight levels. The doors and storefronts use 5/8-inch tempered glass; concession areas use curved glass, and some areas on the third level required security glazing.

The doors, railings and partitions inside the stadium are made of Starphire® glass by Vitro Architectural Glass. The stadium’s fabricator was Glasswerks LA and Aragon Construction worked in the stadium’s interior glazing.

In addition, some of the conference rooms and suites use switchable privacy glass.

“Privacy glass [operates with a switch], just like a light switch. You can’t see on the other side, like if there was another office or conference room… You hit [the switch], and then it clears up, and you can see what’s going on outside,” Cox says.

Next year, the Super Bowl heads to Arizona, and in 2024 is scheduled for Allegiant Stadium in Las Vegas, where Giroux also played a role. That stadium officially opened in July 2020.

“We look forward to doing it again for Allegiant,” says Barbara Kotsos, director of marketing and public relations for Giroux Glass. “We actually had work going on for both stadiums at the same time.”

Four years after the game in Nevada, Giroux Glass will be back in the glass and glazing spotlight in Los Angeles, as the city and SoFi Stadium will host the Opening and Closing Ceremonies for the 2028 Summer Olympic Games.