Posted on February 8, 2022 by Luly Hernandez 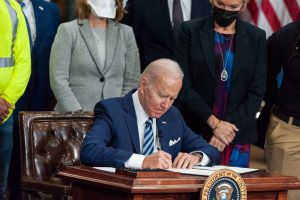 Hosting a visit from a sitting president is not an event that can occur without extensive planning.

Aaron Bast, a business manager at Local 5, says plenty of coordination and planning occurred between the facility, secret service and White House staff.

“We had to determine hold rooms for the president and vice-president, presidential and Secret Service staff,” Bast says. “We had to set up the area where he gave his speech and signed the executive order, and there was a lot of stuff we had to move to make room for everything,” he says. 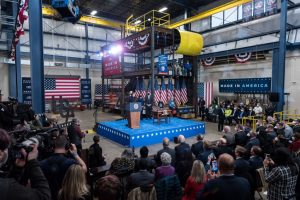 According to Bast, the entire Local 5 staff of 14 and an additional seven apprentices were present. Approximately 30 guests from the White House and another 25 members of the press attended.

Bast says there was a complete sweep of the facility and all doors locked in anticipation of the president’s arrival.

“Certain parts of the facility were closed to all people…we closed for business that day,” he 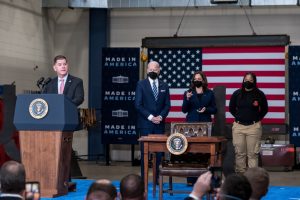 Vice president Kamala Harris and labor secretary Marty Walsh also attended. Walsh was a member of Laborers Local 223 in Boston and became the head of the Building and Construction Trades Council from 2011 to 2013.

Looking back on the event, Bast says there isn’t anything he would change.

“The whole experience was so amazing and I will never forget it,” he says.

The executive order is intended to help alleviate the management and coordination challenges that can hinder progress on major construction projects. 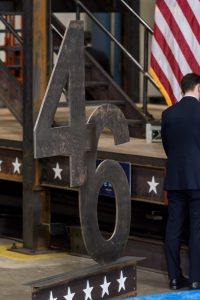 “The executive order I’m going to sign will help defuse problems before they arise,” Biden said during his visit. “They’re going to improve coordination between contractors, subcontractors, and workers on the jobsite. It’s going to help guarantee a consistent supply of high-quality, highly trained workers.”

Local 5’s 52,000 square foot facility consists of classrooms, welding and training stations, mock-ups and even a five-ton overhead crane that are used to train apprentices who will take on work in trades including glass and glazing.