The American Bird Conservancy (ABC) has worked with Washington College in Maryland to double its capacity to test and rate glass and other materials for their ability to deter bird collisions. 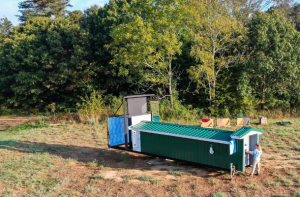 “It was easy to say yes to this partnership because of how incredible it is for bird conservation,” says Michael Hardesty, director of the river and field campus at Washington College. “The glass testing program represents the full spectrum of science moving to action.”

The glass testing tunnel at Washington College’s Foreman’s Branch Bird Observatory (FBBO) in Chestertown, Md., began operations last fall. Along with ABC’s existing test site at Carnegie Museum of Natural History’s Powdermill Avian Research Center in Rector, Pa., the new tunnel is one of just two facilities in North America that can test glass and provide a “bird-friendly” rating, called a Material Threat Factor. This rating system makes it easier for governments to enact bird-friendly policies and for architects to design safer buildings for birds.

“The tunnels may look funny on the outside, but inside is scientific apparatus that lets birds demonstrate for us what glass materials they see and what they will avoid,” says Christine Sheppard, director of ABC’s Glass Collisions Program.

ABC began testing glass with its first tunnel in 2010. A bird is released into one end of the 24-foot-long tunnel in each trial. The bird flies toward the light at the other end, where there are two different panes of glass — a test pane and a clear glass pane. By studying the birds’ flight paths, ABC can assign the glass a Material Threat Factor score based on how many times birds fly toward the test pane; avoidance of the pane indicates that the birds can see and avoid the glass. According to ABC, the tested birds safely bounce off a mist net before reaching the glass, ensuring that no birds are harmed during testing. After a single test flight, each bird is released back into the wild.

Washington College’s FBBO site is on the migration route of frequent-collider species like the White-throated Sparrow, and researchers band more birds during migration here than at any other banding station in the country, according to ABC. The station has a rotating team of banders who monitor 92 nets spread over 55 acres. A tunnel technician, employed by Washington College, records and reviews videos of each flight, noting which pane of glass the bird flew toward.