Less than 24% –that’s the percentage of women who work in glass and glass product manufacturing, despite making up 47% of all employed individuals. According to the same report from the 2021 labor force statistics from the current population survey from the U.S. Bureau of Labor Statistics, women make up an even smaller percentage of the general construction sector—11%.

March marks Women’s History Month, and this week has been deemed Women in Construction Week. Females may make up a small percentage of the construction industry, but their presence is profound. 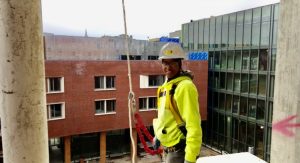 Tureka Dixon is a glazier and a recruitment coordinator for the International Union of Painters and Allied Trades District Council 21. She says her start in the business was difficult as she did not have anyone helping her navigate through the application process. “That is not the case today,” she says. “There are several pre-apprentice programs to assist individuals through the process. Once I was accepted into the apprenticeship, I just followed the guidelines. I completed all [of the tasks I was given], got all of the required certifications and the rest is history.”

One of her favorite memories is working as an apprentice on the Dilworth Circle project in downtown Philadelphia, where she also had the opportunity to work alongside a fellow female glazier, Cindy Ortman.

“She was a union glazier before me–I was still an apprentice and she taught me a lot. This does not happen often, especially with so few women in the trade. When we get the opportunity to work with one another, it is just extra love.”

However, just because Dixon made it past the first hurdle of starting in the industry alone, she still faces challenges related to being one of the few women in the trade. She says she has additional boundaries in place and works a little bit harder than most.

“You must let people know where you stand and show your determination and work ethic. At the end of the day, you arrive at the jobsite to work and get paid. It is important not to let anyone get in your way.”

Her biggest challenge, she says, is accepting that she may be the only woman on the job.

“There are very few females in the trade. You must first accept that fact, and once you get past it and set boundaries for yourself and co-workers, the work is done.”

Despite being a part of a discouraging statistic, her relationship with her male counterparts is anything but. She describes them as her brothers—who, like real brothers, get on her nerves, but are also protective.

When it comes to encouraging other women to join the field, Dixon believes advertising is one of the best ways to increase the numbers. If women see other women working, there will be more inquiries, and she has seen this become commonplace. “Slowly but surely, the word is getting out,” she says.

“I am proud to be in a union that values people and the hard work they do. Glazing isn’t just a job; it is a fulfilling career. We are not just co-workers, we are family,” Dixon says.

Lety Arias is another woman in the glazing industry, serving as the CEO of Custom Glass Specialties Inc., based in National City, Calif. She first worked alongside her father in 1979 and then started her own business 10 years later with her husband, Joe. She says her daughter, Korina Barrios, has even followed in her path and now works by her side. Barrios has been the office manager for about five years and hopes to continue at Custom Glass even after Lety and Joe eventually retire.

Arias says one of her biggest challenges as a woman in a male-dominated industry is that men don’t always want to speak with her at first.

“They want to speak to a man, not a woman,” she says. “They don’t think we know and understand this business, but we do–it’s in our blood.”

Arias says glass and glazing is a “wonderful business to be in,” and women will be more encouraged to be a part of it when the glazing industry and community allows them to show that they possess the skills to succeed.

“I feel we have achieved so much,” she says. Custom Glass works on commercial and residential glazing and Arias says that, as a woman involved in those jobs, watching a project come together and “being a part of someone’s dream,” she sees more opportunities for the future.

This entry was posted in Featured News, News, Today's News and tagged Construction, glass and glazing, women. Bookmark the permalink.