Crystal Window & Door Systems has completed the installation of a large, almost 1- 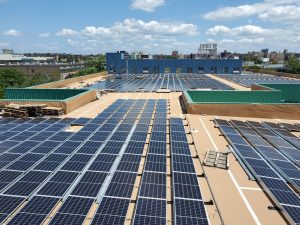 megawatt solar electricity generation system on the rooftop of its headquarters and main production facility in Queens, N.Y. The system includes over 2,300 solar panels and is expected to generate nearly one million kW-h annually, offsetting about 35% of the manufacturer’s overall electricity needs. According to the company, the Crystal system is one of the larger systems in Queens and New York City.

“Our New York headquarters and factory building has over 100,000 square feet of unshaded usable roof space, so solar panels just made sense,” says Thomas Chen, chairman, and founder of Crystal Windows. “The new solar electricity generation system is a perfect complement to Crystal’s emphasis on product energy efficiency. Just as we are committed to providing state-of-the-art energy-efficient products for home and building owners, we are committed to reducing our carbon footprint here in New York City and making our production facility as energy efficient as possible.”

According to the U.S. Environmental Protection Agency, replacing one million kW-h annually with solar energy eliminates over 1.5 million pounds of carbon dioxide per year from the atmosphere.

A custom racking and bedding system was designed and fabricated for Crystal’s solar panels, with a 10-degree slope and a non-roof-penetrating connection system. The entire system uses 2,320 solar panels, associated racks, and 18 electrical power inverters.