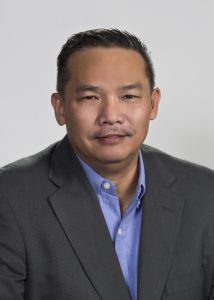 Giroux Glass Inc. has announced the loss of Thomas Santiago Taitano, who the company describes as “their esteemed and longtime colleague” in Las Vegas. Taitano died unexpectedly on April 13. He was 53.

In 2003, as a recent arrival from Guam, Taitano was one of the first employees hired to launch Giroux Glass’ expansion into Nevada. He was hired as an estimator by Stephanie Lamb, and was thrilled with the opportunity to be part of the company’s entry into Las Vegas. A company press release says Taitano “brought with him his warm charisma, smile, strong work ethic and can-do attitude.”

Over his 19-year career with the company, Taitano successfully contributed to hundreds of projects that shaped the local glazing landscape, including notable landmarks such as the Pechanga Resort Casino, Resorts World Las Vegas and MSG Sphere at The Venetian.

Taitano, as senior estimator, reported to preconstruction executive, Daniel Rodriguez, who says, “Thomas had an impressive engineering mind; there was no project too large, too small, or too complex for him to figure out. He was a true team player, one upon whom we could always count on to get a job done, and to know the answer. Not only did we develop a great working relationship over the past 15 years, we were also close friends outside of work, and shared many great memories with each other’s families. He brought to the office a positive energy and his one-of-a-kind sense of humor. To say he was ‘unique’ is an understatement. Words cannot express just how much he will be missed.”

Greg Wright, vice president of Nevada operations, adds that, “Our close-knit team is devastated over our loss. Thomas was not only a long-time partner, he was a member of our Giroux family and a true friend. Tom provided so many years of dedicated service to our company. With his 30+ years of experience in glass and glazing, over the years, Thomas has mentored and shared his vast knowledge and experience with our entire team. Tom brought so much laughter, love, and joy to all of us, along with his skills and dedicated work ethic. It will never be the same without our Thomas – but Giroux will continue to succeed and keep Thomas’ memory alive in our hearts and souls. Rest in peace, my friend.”

“As employee owners, we will be forever grateful for Thomas’ loyalty and his contributions to the success of Giroux Glass,” says Nataline Lomedico, CEO and president.

Taitano is survived throughout the U.S. and Guam by his mother and aunt, ten siblings, and seven children. Funeral services will take place on Sunday April 24 at Davis Funeral Home, in Las Vegas, and a GoFundMe campaign has been set up in his name.