Giroux Glass Inc. announced the promotion of Michelle Fainberg, to the newly-created 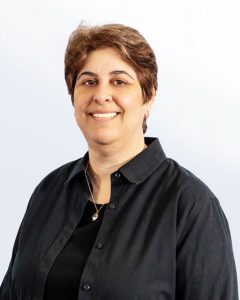 role of director of pre-construction design and technology. Fainberg is now responsible for design-build/design-assist projects and manages a team of technicians in the company’s commercial computer-aided design (CAD) group in California. In addition, she will oversee all systems and decisions involving information technology and software.

Giroux Glass hired Fainberg as an intern in 1996 after graduating from the University of Southern California with her degree in architecture. Her first assignment was to computerize hand-drawn shop drawings, introducing CAD to the company. After her permanent hire and in her role as CAD manager, Fainberg was involved with the design of over $600 million worth of projects, devising solutions for numerous challenging design issues, as well as assisting in some of the company’s earliest complex projects, such as West Angeles Cathedral in the 1990s. Over the course of her tenure, she has been named the company’s “employee of the month” three times.

“Michelle has been wearing multiple hats at Giroux Glass for so many years,” says John Cox, director of California project operations. “This new role will allow us to maximize the opportunity to benefit from all of her diverse skills.”

“Michelle has been a tremendous contributor to Giroux’s growth and success for the past 25 years,” says Nataline Lomedico, CEO and president. “… It’s wonderful to know that she came to Giroux as our very first intern and is now an employee owner and a director. We are incredibly proud of Michelle and admire her high standard of excellence. She is uniquely qualified to fill this role; one in which she will certainly continue to be the valuable asset to our team she has been for over 25 years.”