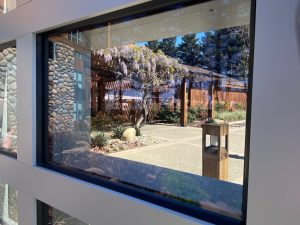 NEXT Energy Technologies Inc., makers of a proprietary transparent photovoltaic (PV) coating that transforms commercial windows into energy-producing solar panels, has announced the demonstration of a PC prototype window wall at the headquarters of its manufacturing and glazing partner Walters & Wolf in Fremont, Calif. The wall was created in collaboration with NEXT, Walters & Wolf, and commercial glass fabricator Glassfab Tempering Services.

“Our team sees building-integrated photovoltaics, such as NEXT’s window coating technology, as the next major evolution in building science,” said Nick Kocelj, president of Walters & Wolf. “Working hand-in-hand with the team at NEXT to exhibit this amazing technology highlights Walters & Wolf’s commitment to the positive, green future of the glazing and building enveloping industry in a meaningful and lasting way.”

NEXT says its proprietary transparent PV coating transforms commercial windows into energy-producing solar panels by converting unwanted infrared and UV light into electricity. The fully-integrated system is marketed as enabling a building to power itself with its windows, which remain transparent with the coating in place. This prototype installation is the second of its kind in the world and the first in the U.S. The corresponding demo wall is at the Bouygues Construction company headquarters in Paris. The wall consists of 10 transparent photovoltaic windows that supply electricity to power an interactive display and outlet.

NEXT says the wall showcases the power-generation functionality, transparency and aesthetics, and the seamless integration of the company’s transparent coating into a standard window-glazing system designed by Walters & Wolf to carry the electronics, wiring and hardware. This direct integration into traditional commercial window and framing systems effectively extracts costs typically associated with packaging and installation of solar, according to the company.

NEXT’s photovoltaic coatings are applied to commercial windows during the window fabrication process, integrating with existing manufacturers without disrupting established workflows and supply chains. This capital-efficient business model reduces risks to customers, removes barriers to adoption, and accelerates speed to market, all while adding a high-value product to the market. 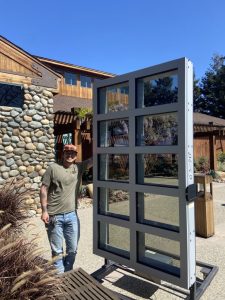 In 2021, the California Energy Commission (CEC) voted to require builders to include solar power and battery storage in many new commercial structures as well as high-rise residential projects.

“The Energy Commission is proud to continue to advance solar technologies like this that will help commercial buildings operate in a cleaner and greener way,” said CEC chair David Hochschild. “Such investments drive innovation and entrepreneurship to help meet California’s climate and clean energy goals.”

“In order to address the climate crisis, we have to be creative and cost-effective. The regular approaches alone just won’t cut it anymore,” added Daniel Emmett, CEO of NEXT Energy Technologies. “Commercial buildings are an ideal example of everyday infrastructure that can be re-imagined and improved to reduce society’s carbon footprint. As we advance our technology, we are dedicated to advancing the world’s action against the climate crisis, one window at a time.”