Financial sanctions have dealt a “pretty significant blow” to Russia, says Isabelle Icso, director of international policy at the U.S. Chamber of Commerce in Washington, D.C. More sanctions are likely on the way courtesy of the U.S. and the European Union (EU), all while markets rile, and businesses leave to protect their profits and reputations. 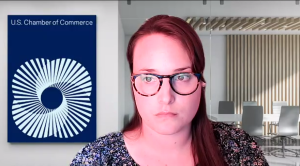 Icso addressed the Window & Door Manufacturers Association at its virtual Spring Meeting and Legislative Conference held last week. She says sanctions imposed on Russia with the country’s invasion of Ukraine can be broken into different categories, with the first, financial sanctions, seeing the most success so far.

“The financial sanctions imposed to date have been really unprecedented in their impact and breadth, both with respect to interagency coordination as well as coordination with allies,” Icso says. “The biggest financial sanction and the most impactful impacts Russia’s central bank, and essentially cuts the country off from its foreign exchange reserves.”

Russia can no longer access those reserves, which Icso says lie in the ledgers of Western institutions. In fact, Icso says those efforts have been so successful that in Russia’s negotiations with Ukraine, the former has asked for a destabilization of sanctions. According to Icso, that means the sanctions are “hitting hard.” The U.S. and the EU also decided to remove a number of Russian banks from the Society for Worldwide Interbank Financial Telecommunication (SWIFT).

Also impacting Russia are export controls, which allow consumer goods to continue their flow into Russia. However, those controls block the export to Russia of military products and western technology used militarily or to produce energy. Icso says they also block products made anywhere in the world so long as they contain U.S. components, software or critical technology.

“The commerce department said (last week) that these export controls have led to a 99% drop in controlled technology exports to Russia,” Icso says. “So again, they’re clearly having a major impact.”

Icso says the U.S. also plans to help the EU out of its energy reliance on Russia, adding that the chamber believes the United States should do so by partnering with domestic energy producers. In March, President Joe Biden also called for an end to permanent, normal trade relations with Russia. Icso says that move would clear the way for increased tariffs on Russian imports.

The announcement, made in concert with G7 and EU leaders, included a ban on the export of luxury goods and import of signature goods and a ban on new investment into any sector of the Russian economy.

She called it a “major blanket ban on investment we haven’t seen for some time.”

Lastly, the assets of Kremlin-backed Russian oligarchs are frozen, with those oligarchs also blocked from financial institutions and transactions with Western entities. However, many of those persons have their assets hidden, so analysts are keeping an eye on what kind of impact the action has. 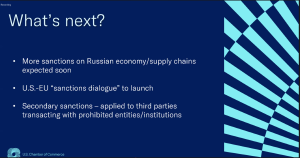 Icso expects more sanctions on the Russian economy and critical supply chains, with the U.S. and EU have already begun a sanctions dialogue. She says the Biden Administration is likely to focus on enforcement through secondary sanctions applied to third parties transacting with prohibited entities and institutions. She says that could include China among other countries.

“I think China continues to be in the crosshairs of this international dispute and has largely tried to stay neutral, at least publically,” Icso says. “In a nutshell, they’ve basically touted humanitarian aid to Ukraine but have refused to criticize Putin’s invasion in any form. All in all, I think when it comes down to whether China can afford to really help Russia, when pressed to choose sides, I’d wager that China trade favors the West and may not be able to uphold a position of indifference for long.”

“To conclude on sanctions, the impact of the war has been immense,” Icso says. “Markets are roiled, companies are exiting. Four hundred-plus have either suspended or completely withdrawn operations. The sanctions environment essentially makes exiting necessary, along with just the fact that profits aren’t even really able to be made for a number of reasons, including the sanctions as well as Russian laws that are under consideration. All in all, reputational risk is a major consideration.”