“Glass is an enabler for modern civilization and scientific discovery.” That’s what John Mauro from the Department of Materials Science and Engineering at The Pennsylvania State University shared Thursday morning during the National Day of Glass in Washington, D.C. The event is organized by the American Ceramic Society and serves as the country’s kick off for the International Year of Glass (IYOG).

Mauro, who could not attend in person, provided a virtual presentation that offered a look at research for the Glass Age. Before getting into the future, he said, the industry has to look at the past. That includes the importance of windows, which he described as a testament to outstanding engineering and science.

He also noted many other important glass developments. These include optical lenses for eyeglasses, glass lenses for telescopes, which helped enable the entire field of modern astronomy, as well as glass lenses for microscopes, which facilitated the entire field of microbiology. He also pointed to glass containers, including those used in the pharmaceutical industry, and optical fibers, which made the internet possible, display glass, phones and transportation.

“Glass is key in revolutionizing all of these things,” he said, adding that glass has been a medium for art glass as well. “It’s not just about science and engineering …”

Mauro shared information from a survey he conducted with glass professionals asking about the glass products they felt had been most impactful. He mentioned the top three were glass lenses, optical fibers and glass windows.

The survey also found several important themes. These included the importance of optical transparency; mechanical strength; chemical durability; and the dominance of silicates.
Over the past two days, presenters talked about the world entering the Glass Age. Mauro continued in that direction, talking about the significance of glass for information technology.

“Glass played a big role in this,” he said, “And will continue to play a role in next generation displays, augmented reality, quantum communications and memory storage.”
He added that glass has revolutionized architecture and transportation. For example, he expects to see a move toward more interior display glass in automobiles as we move more and more toward driverless vehicles. Also, energy-efficient glazing will prove critical in building the future cities. He noted how glazing products have helped improve a building’s energy performance and acoustics. He added that glass has a role in next-generation energy, such as wind energy and photovoltaics, among others.

The program also included a session from Naoki Sugimoto, AGC’s executive officer and 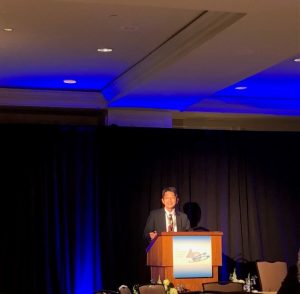 Naoki Sugimoto with AGC spoke during the National Day of Glass about future possibilities in glass applications.

general manager, Materials Integration Laboratories. He talked about developments in glass and how it continues to evolve, such as 5th Generation Communication (5G). He said we’re starting to see an explosion of mobile traffic. 5G communication technology uses high-frequency radio waves, which can face several issues. In particular, transmitting through building materials can be difficult, and the coverage area of the antenna is smaller than 4G. To improve the issues, AGC worked with DOCOMO, a mobile phone company, to develop a prototype technology that efficiently guides 28-GHz 5G radio signals received from outdoors to specific locations indoors using a film-like metasurface lens that attaches to window surfaces.

While technologies such as this are still in development, Sugimoto said it’s clear that glass is continuously evolving.

The National Day of Glass concludes Thursday, but there are hundreds of other IYOG events scheduled to take place around the world. More information about those activities, as well as the IYOG, is available here.

Stay tuned to USGNN™ for more news and updates on the National Day of Glass and the IYOG.