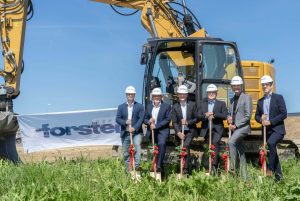 A symbolic, groundbreaking ceremony marked the start of construction for Forster Profilsysteme AG’s new campus in Romanshorn, Switzerland. The steel and stainless steel door, window and façade systems manufacturer is investing approximately $54 million in the project, located in the Swiss canton of Thurgau. Measuring more than 30,000 square meters, the company says its new campus will “set standards in terms of design, technology and sustainability,” while bringing together employees who have previously been spread across two locations. It is scheduled to be completed in 2024, just in time to mark the company’s 150th anniversary.

Ten kilometers from the current location, the Forster Campus is set in a rural environment and consists of three different structures. The new building also features Forster products. 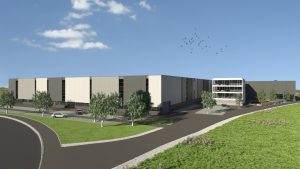 Three buildings, one idea: The new Forster Campus in Romanshorn brings together employees who were previously spread across two locations – and sets standards in design, technology and sustainability. Image: Forster Profile Systems

The production and logistics hall will be the largest building and have a high-bay warehouse. The adjacent technology center offers space for the training center, the production workshop and a test center. The third building which contains office space.

Almost all the roofs are equipped with solar panels, and with an output of up to 1.5 megawatts, the company says green electricity will power the entire production process. Forster says the new campus will be the first commercial building in Switzerland to receive a LEED certification at the gold level.