American Bird Conservancy (ABC) has released a position statement highlighting this year’s Migratory Bird Day theme of light pollution, and the issue related of the millions of migratory birds traveling over North America that will become disoriented by artificial light and die after a collision with glass this season. The ABC issued its statement, titled “Misguiding Light: The Role Artificial Light Plays in Bird Mortality from Collisions with Glass,” to help equip the public and policymakers with the latest science-based recommendations to reduce light-related bird deaths. 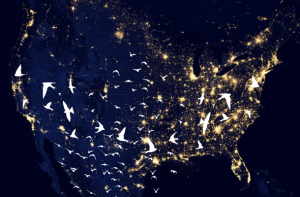 “There is more and more scientific evidence of the pervasiveness of light pollution and its negative impact on birds,” said Christine Sheppard, ABC’s glass collisions program director and author of the new position statement. “ABC has gathered this information, along with recommendations to help combat the problem and reduce bird mortality.”

In a press release, the ABC states that artificial light at night disorients migrating birds like the White-throated Sparrow and the Hermit Thrush, luring them toward and into urban centers. Once birds land near buildings, they are at increased risk of glass collisions, which the association describes as “one of the most significant human-caused threats to birds in North America.” The organization is encouraging the policymakers and the public to take actions to counteract light pollution, which can save many birds’ lives.

“Lights Out programs do a lot to inform the public and to reduce light pollution, but we need to do much more if we are to reverse current trends,” Sheppard said.

ABC recommends that more places in North America follow the lead of New York City and consider replacing or supplementing voluntary programs with policy solutions, though the organization notes that “any strategy used to reduce dangerous lighting should also target light’s accomplice: glass.” It is what the ABC calls “deceptive” glass surfaces that they say are the primary cause of subsequent deaths. ABC recommends that bird-friendly lighting policies be combined with bird-safe building measures to ensure that migratory birds’ journeys aren’t cut short with a split-second thud.

“Even if we could turn off every light at night, birds would still pass through the built environment in large numbers,” Sheppard said. “This makes it critical to promote and implement bird-friendly design as fundamental to the design process for all new buildings.”