Construction starts are forecast to rise 9% in 2022, prompting Richard Branch, chief economist with Dodge Construction Network, to say he feels “reasonably positive” about the industry’s trajectory. But with many projects just now entering backlogs, some sectors may have to wait years to see solid recovery.

According to the Dodge Construction Network 2022 Mid-Year Outlook provided via webinar on May 26, growth in the commercial sector is forecast to be broader than it was in 2021. For example, the 13% increase in commercial construction starts in 2021 drops to just 2% if warehouse starts are removed from the equation. For 2022, removing warehousing does not have that same effect.

Branch says warehouse construction starts will begin to decline in the years to come after posting $55 billion to the Dodge Momentum Index over the past 12 months. Activity did slow, however, toward the back half of 2021. Amazon, which owns 6% of projects breaking ground, has also announced its intention to begin pulling back. 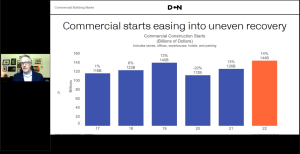 The retail sector continues to experience growth at 21%. However, a “real resurgence” is not expected within the next five years.

“As we look over the next five years, it’s doubtful that retail construction starts will get back to the peak that we saw in 2017, even when we consider inflation is already baked into these numbers,” Branch says. “Even with the growth rates we’re expecting, the levels of activity will remain fairly restrained here in the years to come.”

Driving that growth is the residential sector’s shift away from large centers, and into rural and suburban areas. Branch says stores already located in those areas are now being renovated to accommodate increased patronage.

Branch says the hotel sector has a limited path to recovery but that there was improvement in each subsequent quarter throughout 2021. Projects entering the pre-planning stages for 2022 are on the rise but it may be up to two years before groundbreaking occurs. The 9% growth in the office sector for 2022 stems from renovations, which account for 52% of office activity for the first three months of this year. Data centers are also on the rise and supporting growth in office construction.

While institutional building starts have been slow to recover, health care starts are poised for growth. Uncertainty surrounding education starts as a result from the pandemic could begin to ease with a return to normalcy as kids go back to school.

All in all, Branch says the markets with the smallest risk for 2022 are education, transportation and health care. Markets with the most risk include offices, warehouse and hotels.

Pricing and people are the primary factors affecting construction starts, according to Branch. Bid prices have continued to rise over the past 12 months and Branch expects that trend to remain through the end of 2022. But those prices are forecast to ease toward the end of 2022 and beginning of 2023. There’s also the lingering labor shortage issue, which currently sits at approximately 400,000 open positions in the industry. Branch says that shortage will stifle activity in the years to come.

“These price issues and the labor issues are teaming up to delay project starts,” Branch says. “Office projects are taking nine months longer to go from early planning to groundbreaking than they were prior to the pandemic.”