After only a few years of operating in its Newington, Conn., facility, Schüco USA has doubled its warehouse production space, from 50,000  to 100,000-square feet. President Attila Arian says the additional space was necessary to meet the increased demand for high-performance envelope components. That move, he says, has already helped to meet  a “huge demand” in the market.

Schüco USA began producing windows in Connecticut a few years ago, leading to a new business model for the U.S. Arian says the company’s European business model as a system supplier doesn’t work in the United States, so Schüco began manufacturing windows.

“We realized there wasn’t enough interest in fabricating our product but here was a big and growing demand for these high-performance envelope components–essentially the windows, sliding door systems and curtainwalls,” Arian says. 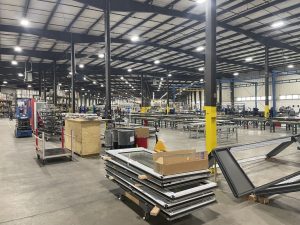 It didn’t take long for the German company to realize that meeting the demand for such products would require additional space. Schüco owns the building where it operates in Connecticut, but had leased approximately half its space  to another tenant. When that lease was up, the company decided to expand.

“The tenant moved out at the end of February and we moved in right away,” Arian says. “We took the wall out between our existing fabrication and the space occupied by the tenant. We had no time to lose, so we needed to do any improvements to the building necessary with the move.”

That included consolidating an existing warehouse for raw materials, and moving into the new space so all materials are in one location. Schüco also completed the transition without halting production.

“We never stopped production,” Arian says. “We did have a lower level of efficiency for a week or two, but the ongoing projects had to be produced. Any improvements needed happened at the same time as production.”

Helping with that process was a substantial increase in its workforce. Schüco has gone from just 25 employees in Connecticut to 144. Employment has ramped up in four distinct areas including engineering, project management, logistics and fabrication.

“The team approached it through very extensive pre-planning,” Arian says. “Everybody knew what needed to be done once the wall came down and the rest of it was very hard work. Multiple shifts, people working on weekends and late hours to make sure we were accomplishing the move, the expansion of production, while avoiding negative impacts on ongoing projects.”

Schüco now operates six lines at the facility, which Arian says means expanded capacity and a better flow of processes.

“It has met a huge demand in the market,” Arian says. “We have a filled backlog and a big demand for our windows. We may even have to establish other locations.”

Schüco USA is also in the process of setting up a product line with stocked materials that will allow it to react better to lead times.

“We are investing in materials before we even have the projects so we have the materials available to us when we get the project assigned or awarded,” Arian says. “Then we deal with finishing, so this will shorten the lead time for our clients.”

But Arian says that requires a sophisticated warehouse management system. The company’s system not only manages the project, but also houses all associated documentation, schedules and more.