Trex Commercial was named “Trade Contractor of the Year” by the Cincinnati-Kentucky branch of Turner Construction Co. 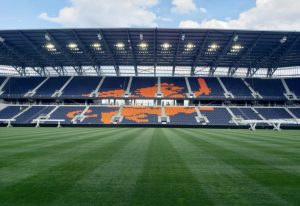 Trex Commercial was named “Trade Contractor of the Year” by the Cincinnati-Kentucky branch of Turner Construction Co.

“Being recognized by one of the most respected general contractors in the industry is especially rewarding,” said Laura Rygielski Preston, president of Trex Commercial. “We understand our role is more than just a fabricator of a designer’s concepts and strive to be a trusted and collaborative partner on all our projects. We greatly appreciate the trust and acknowledgment of the Turner Construction team and are extremely proud of our team members who contributed to the successful result of this high-profile project.”

TQL Stadium, a 518,000 square-foot soccer venue, serves as home to Major League Soccer’s F.C. Cincinnati. The venue features nearly 20,000 linear feet of Trex Commercial railing. The railing comes in seven different styles and is found within and outside of the stadium. The Trex Commercial team also custom-engineered fencing, gates and other architectural elements.

“We at Turner believe that our success is in a very large measure attributable to our trade contractors being true partners in construction,” said Susie Yanes, contracts manager for Turner Construction Co.. “All too often suppliers hear from the general contractor only when things are going badly. We believe it is also appropriate to recognize our trade partners when their work is outstanding and, as such, we are pleased to pay special tribute to the Trex Commercial team for its performance and contribution to our shared success on this project.”