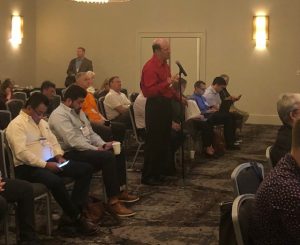 The second day of the 2022 NGA Glass Conference: Chicago continued on Tuesday at the Renaissance Hotel in Northbrook, Ill. The Fabricating Committee resumed its discussions from Monday with an update on industry collaborations with various other groups and reports from the energy and insulating subcommittees.

John Kent with AMS opened the meeting with updates on activities within the Safety Glazing Certification Council (SGCC), Insulating Glass Certification Council (IGCC), and ANSI Z97.1, among others. Kent said SGCC is now certifying coated glass. SGCC had previously worked under the premise that coated glass was equivalent to clear tempered glass. Since this is debatable, SGCC decided to certify coated glass, which must be tested at least annually.

Also, given the supply chain issues, Kent said rejected glass can be used for testing.
“It doesn’t have to be pristine,” Kent said. 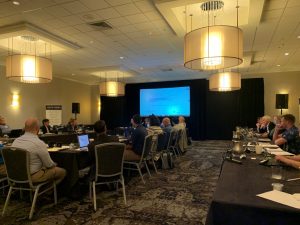 Kent also discussed progress on the Rapid Assessment Chamber (RAC), which cuts down on approval times for products from several months to around 14 days, Kent said. This allows companies to approve and release their products in a timely manner.

Industry consultant Tom Culp provided an update on activities within the National Fenestration Rating Council (NFRC), which is working on a new commercial program. Culp said that while companies are using NFRC numbers, the current commercial program is not being used as much. Furthermore, the NFRC is working on a new program with more involvement from key industry members.

The board approved the new program which will now be implemented by staff. Culp said some companies might choose to have a lab certify the entire project, while other manufacturers might want to have a product rather than a project certified. A new online tool will be available to streamline the process. The goal will be to launch the new program within the next year.

Amy Roberts, of the Fenestration Glazing Industry Alliance, (FGIA) provided updates from her organization, including the creation of new task groups, the addition of a new document, Design Consideration for IG Cavity Compensation, and the release of the Do’s and Don’ts of Glass Safety, which was published in June.

The discussion about energy opened with an update on Environmental Product Declarations (EPD), which is a standardized document that details a product’s potential environment and human health impact. Culp said that an attempt is being made to have an update for the 2023 version of the code. Culp added that he is working on allowing EDPs on components submitted, such as framing and glass. This will go out for public review soon.

The discussion then turned to insulating glass. The first topic raised was the edits and addition of breather tubes in the document, Guidelines for Use of Capillary Tubes, along with revisions to the Fabricator Considerations for Large Glass Products, which are done in tandem with FGIA.

The Chicago Glass Conference continues through Wednesday. Stay tuned to USGNN™ for more news and updates from the event.