Hurricanes today are stronger, move slower across the landscape, unleash deadlier storm surges and drop more precipitation than they did 20 years ago.

This enhanced threat to life and limb has forced localities and glass industry companies to rethink the way structures and fenestration are designed and installed. 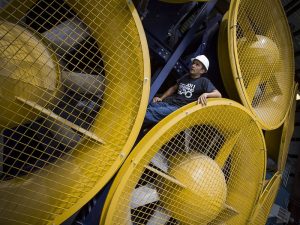 WOW has led to improved building codes and life-saving innovations that have been used to mitigate the effects of hurricanes and extreme weather systems. Photo courtesy of FIU.

Current building codes throughout the country exist to reduce the threat of hurricanes today, but as the climate changes, the unexpected will become the expected. As a result, testing is needed to design more durable hurricane-resistant windows and stronger structures.

That’s the goal of the soon-to-be National Full-Scale Testing Infrastructure for Community Hardening in Extreme Wind, Surge and Wave Events (NICHE) facility at Florida International University (FIU), located in Miami. According to Dr. Ioannis Zisis, the co-director of the Laboratory for Wind Engineering Research at FIU, the project will study the effects of extreme wind events on structures.

“This new NICHE facility will be a place for the window industry to bring their products and to do the kinds of testing in extreme winds to see what can be done, what could be done and to see how things will hold up,” says Erik Salna, associate director for education and outreach at the International Hurricane Research Center (IHRC).

The destruction from hurricanes Irma (2017) and Dorian (2019) raised awareness for the need to develop increasingly resistant materials. According to Salna, it makes sense to build a facility that can create the conditions of deadly hurricanes to help enhance the wind engineering science and building codes.

“We can’t go in with the attitude that nothing can survive those kinds of winds,” says Salna. “How do you know that if you don’t try? How do you know that until you have a testing facility that can test structures and see if we can make them more resilient even to those extreme winds?”

In response to the strengthening of hurricanes, FIU and a team of international experts started work on one of the world’s most advanced hurricane simulators, the NICHE facility. 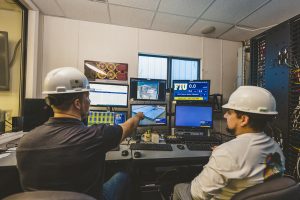 FIU and a team of international experts started work on one of the world’s most advanced hurricane simulators, the NICHE facility. Photo courtesy of FIU.

The football-sized facility will be able to simulate the combined effects of extreme winds of up to 200 mph, storm surge, waves and overland water flows on buildings, water and energy systems along with other key infrastructure.

“We’re going to bring more hazards under one research roof,” says Salna. “This will now be able to test structures with multiple hazards. That’s the vision.”

The testing will include computational simulations, field observations and physical experimentation through a constructed prototype test bed the size of a football field. This includes utilizing fans that generate wind speeds in the range of 180-200 mph and a wave basin to simulate surge and wave action.

Though the NICHE facility has also been called the “Cat 6” project because it will test homes and other structures to winds of 200 mph and storm surge of 20 feet, there are no plans to institute a Category 6 rating on the Saffir-Simpson Hurricane Wind Scale, says Salna.

According to the IHRC, the first grant for the NICHE is for a prototype. The team hopes the prototype will prove to the NSF that the facility can provide informative outcomes, allowing for a second grant to build the real facility. The facility is intended to become part of NSF’s Natural Hazards Engineering Research Infrastructure (NHERI).

Currently, companies can test their products at FIU’s Wall of Wind (WOW) lab, which was built in 2012 in response to Hurricane Andrew (1992). The facility is the largest of its kind in the U.S. that can test Category 5 winds. 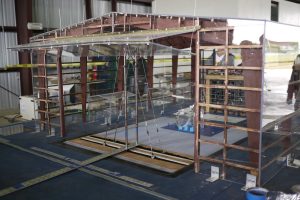 companies can test their products at FIU’s Wall of Wind (WOW) lab, which was built in 2012 in response to Hurricane Andrew (1992). Photo courtesy of FIU.

WOW has led to improved building codes and life-saving innovations that have been used to mitigate the effects of hurricanes and extreme weather systems. These discoveries and solutions have saved lives and prevented millions of dollars in structural damage from storms, according to FIU

The facility has also allowed researchers to design small retrofits that can help harden homes against extreme winds. Testing has found that indented ring shank nails hold stronger than smooth nails; four-sided roofs are most likely to stay on; and metal hurricane straps help keep roofs attached to walls.

“For 10 years, the Wall of Wind has been open to private industry,” says Salna. “Companies do projects with a non-disclosure agreement (NDA). They bring their research and development team and their engineers if they have any new designs. The Wall of Wind is a facility to test these new designs to see how they can be more resilient. Those are some of the rare tests at the Wall of Wind where we go to Category 5. The private industry client wants to know if it works or see if it breaks.”