The school shooting at Robb Elementary School in Uvalde, Texas, in late May not only killed 21 people but also re-emphasized the importance of school safety issues. School shootings are a significant cause for concern throughout the country with many solutions presented but few applicable answers provided. 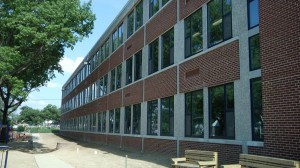 Armoured One provides products and training to help schools and companies deter an active shooter.

According to the Center for Homeland Defense and Security, there have been nearly 2,000 K-12 school shooting incidents since 1970. Since then, more than 600 people have died in school shootings. The highest rate of incidents occurred in 2021, with 249.

The question at the heart of all this is how to prevent these incidents from occurring?

Armoured One, based out of Syracuse, N.Y., aims to answer that question through a combined strategy of prevention and collaboration. The company provides products and training to help schools and companies deter an active shooter.

Armoured One offers many glass options, including shooter attack glass and fire-rated attack glass. This glass was designed by active shooter experts and is military and police-grade, according to Armoured One. The glass is intended to slow down an attacker with a gun and is tested by Filti Testing & Development along with a third-party observer.

The test begins with 10 .223 rounds fired from an AR15. After the glass is shot, it’s struck twice with a 100-pound ram at 50-foot pounds of force. If the ram penetrates the glass before the two hits, the glass is deemed a failure.

The company is currently working with school districts throughout the country, including the city of Jacksonville, Fla., and the Duval County school district, which recently announced that it hired Armoured One, to help keep children safe in the classroom.

“We will first work collaboratively to identify where Armoured One resources can best complement the training already provided, adding their resources to the training tools and resources the district already uses,” Jacksonville Mayor Lenny Curry said at a news conference announcing the partnership.

The school district will use Armoured One’s expertise in training along with conducting school security assessments. Armoured One will issue individual reports for each building and recommend the best equipment for each facility.

“There are weak points, you know, throughout buildings around Duval County, but that’s everywhere in the United States,” Armoured One co-founder and CEO Tom Czyz told News4Jax. “I would say 80% of our buildings are not built for true security to protect. I’m not saying that we don’t want your place to look like a prison. We actually want the most gorgeous-looking, relaxed atmosphere for these kids. But it’s got to be done right.”