Walker Glass, a Montreal-based manufacturer of glazing products for the North American market, celebrates its 80th anniversary in 2022.

According to Walker Glass executive vice president Ross Christie, the secret to success is to nurture a rewarding culture. 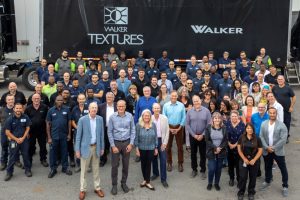 According to Walker Glass executive vice president, the secret to success is to focus on nurturing a rewarding culture.

“One of the important things about the culture at Walker that comes through after eighty years is that we have a lot of fun,” says Christie. “We’re doing business, and it’s not always easy, but we’ve always had fun doing it. At the party last month, everyone was having a great time. It was a family event.”

Walker Glass was founded in 1942 by Arthur Walker. The company began as a mirror silvering workshop. Towards the end of World War II, Walker Glass rode the economic and technological boom, creating a semi-automatic conveyor for silver glass, which was an “indispensable early step toward innovation, automation and large-scale production,” the company says.

In the 1960s, Walker Glass moved into a new 22,000 square-foot-factory that enabled it to expand into new markets. With the move, it became the top decorative mirror supplier to major Canadian retailers.

Walker Glass doubled in size in the 1970s. Its growth allowed it to accommodate more plate glass and mirror production. According to the company, it was the only independent sheet mirror manufacturer in Canada during the time.

As the decades went by, Walker Glass adapted to the times and the rapidly evolving technologies. The 2000s ushered in a new partnership and the company’s largest research development project: Walker Textures. This allowed it to produce artisanal-quality glass at an industrial scale.

In the 2010s, Walker Glass introduced eco-friendly products. In fact, it was the first company to manufacture bird-friendly glazing glass in North America that used permanent markers on the exterior surface. Later in the decade, the company developed AviProtek E alongside Vitro.

“We have a research and development team that just never stops,” says Walker Glass president Lee Harrison. “We have some new things coming down the pipeline that I can’t talk about, but I can tell you that innovation at Walker is an ongoing process. Between that and the market’s shift toward North American production, all indicators point to continued demand and a busy future.”

For all the businesses that have opened recently, Harrison and Ross say that perseverance is the key to survival.

“Never give up,” says Christie. “Harrison and I have been through some low times and survived them because our perseverance has always been off the charts.”