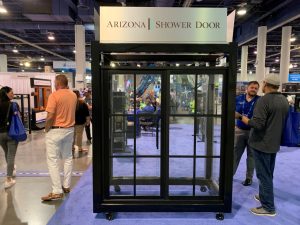 As GlassBuild America enters its second day, companies say that they are pleased with the amount of foot traffic.

With more than 400 exhibitors at Glassbuild America staged throughout the expansive Las Vegas Convention Center in Sin City, and thousands of visitors walking the floor, the annual trade show is the perfect opportunity for companies to network and promote their products.

“There’s some pent-up demand for walking around a tradeshow and talking to vendors,” says John Weise, president of F. Barkow Inc., a manufacturer of glass carriers and glazing bodies with more than 143 years of experience.

Instead of a booth, F. Barkow displayed its Isuzu glass carrier with a 20-foot bed. Weise says that F. Barkow is the only company to have the Izusu at the event. This is because of how difficult it is to obtain due to the ongoing chip shortages, says Weise.

The bed of the Izusu is loaded with an aluminum glass carrier that is welded together, which makes it incredibly durable and strong. Most of F. Barkow’s competitors bolt the components together, says Weise.

When it comes to the production of glass carriers, Weise says that the ongoing material shortages have little effect on F. Barkow’s ability to get aluminum. Weise says that aluminum prices have started to moderate some. Stainless steel, however, is not easy to obtain, says Weise.

As one of F. Barkow’s niche offerings, stainless steel is a sought-after material thanks to the nickel in it, which allows the metal to remain shiny for years. However, the nickel comes from Ukraine, which is expensive at the moment.

“Some of our customers still want it,” says Weise. “We’ll tell them upfront that you’re not going to like the price. Don’t shoot the messenger.”

While supply chain issues are not that bad at the moment, says Weise, lead times are longer than they used to be. Things are improving though, he adds.

GDS Estimating in California has offered its WinBidPro software, which assists with storefront estimating, bidding on jobs and more, for some time. However, the company is now highlighting new program features currently in the beta phase.

“What’s new this year for us is a cloud-based software where they can bin everything in our desktop product, but now it’s connected to our cloud service,” says Ben Zuill-Smith. “All of their data is online so they can take that wherever they want.”

Zuill-Smith says the software is of particular interest to businesses with multiple locations and multiple teams.

“It’s just a lot easier,” he says. “There are also a lot more capabilities for curtainwall over our old version.”

As GlassBuild America enters its second day, companies say that they are pleased with the amount of foot traffic. Before the event, some companies were skeptical about this year’s attendance with the coronavirus still a looming threat. However, those attendance concerns are gone now.

“The show has been good,” says Brian Truchan, territory sales manager for Arizona Shower Door, a provider of bath enclosures, mirrors, glass, and more. “It’s busier than it was in Atlanta last year. I didn’t know that it was going to be this busy.”

GlassBuild America continues until Thursday, Oct. 20, 2022. Stay tuned to USGNN for more news and updates from the show.