The annual GlassBuild America wrapped its Las Vegas run on Thursday following three days of learning, networking and a variety of glass, glazing and fenestration products. The beauty of a trade show is that brings together vendors and customers to socialize, make deals and innovate.

Xinglass America, a manufacturer of glass processing machines and equipment, headquartered in China but with facilities throughout the globe, enjoyed a productive week. Frank Zhu, a director at Xinglass America, says that he was pleased to find that a lot of people were interested in the company’s glass tempering furnaces. 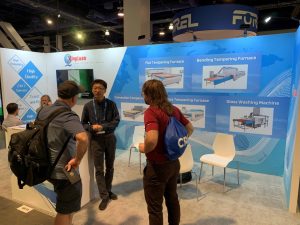 Show attendees stopped by the Xinglass booth to learn more about the company’s tempering equipment.

“That’s the main product that we make,” he says. “We have a lot of existing customers in the U.S. and people see our machines and want to buy one.”

Zhu adds that Xinglass’ line of glass tempering machines is known for reliability. That aspect is important for glass companies because unreliable machines are costly.

“Our machines run continuously 24 hours a day,” says Zhu. “A lot of people using our machines are happy.”

The best thing about this week, says Zhu, was that the representatives who visited Xinglass America’s booth were determined to buy.

“The people who came to our booth were really interested and focused on purchasing a tempering furnace,” he says. “There were not many people just walking and shopping around.”

In addition to some of the mainstays exhibiting and attending, there was also some new blood. That’s what made this week so worthwhile, says Keri Lindsay, an account manager at Cooper Standard ISG, a provider of sealing solutions for residential and commercial door and window applications.

Lindsay says that Cooper Standard spent the week highlighting its design capabilities, such as its finite-element analysis (FEA) capability. FEA modeling is an alternative to physical testing for predicting seal life, particularly when aging poses concerns and seal replacement is expensive.

“We’re the sealing guys,” says Lindsay. “You build the windows, let us seal them. We can do a lot of FEA modeling, which makes sure that the seal is going to behave the way that you want it to behave during the application before you invest in that tooling.”