Quaker Windows and Doors celebrated the expansion of its Eldon, Mo., facility at a ribbon cutting on Monday. The event introduced a new Eldon II facility that adds 250,000 square feet of commercial manufacturing capacity located next to the existing plant. 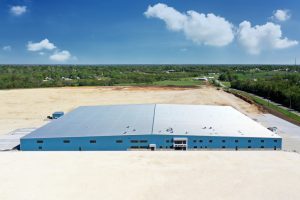 “It’s hats-off to our employees and staff,” says Quaker CEO Kevin Blansett. “We’ve got just the best folks that have that ownership mindset and work hard every day … I can’t mention enough how proud I am of our group and our team. This is a great community and great support.”

Blansett says that four more updates are planned at the Eldon facility. This includes plans for a new paint facility and another glass facility.

“Expansion throughout the U.S. has generated new market share in our commercial, residential and luxury markets,” says Sifflard. “We have a five-year growth strategy, and this expansion was planned to support this strategy. Thank goodness we were able to go online this year as year-to-date Quaker sales are up over 40% over 2021.”

The Eldon campus, located along Missouri 52 at Hicky Road, opened in May 2020. The initial expansion was announced a year later and benefited from local tax abatements.