Embracing Automation: Blue Star Glass’ New Dallas Facility is First of its Kind in US

Blue Star Glass has opened what it says is the first fully automated insulating glass facility in the U.S. The location is also the fourth such facility in the world, according to the company. 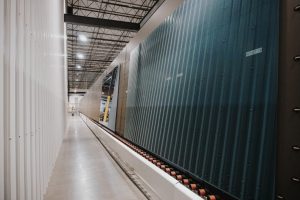 The 145,000-square-foot facility located in Dallas features automated jumbo glass cutting, tempering and insulating, transport and fabrication, all without human interaction. Blue Star president Alex Oanono says that the shift to a reliance on automation will allow the company to focus more on quality than production.

“In our Texas facility, we work with a minimal yet sophisticated staff in comparison to traditional IGU lines which require heavy coordination between operators and stations – this often leads to a focus on production output instead of quality,” says Alex. “Operating a fully automated factory enables our staff to reinforce their focus on quality, planning and logistics coordination, which results in Blue Star being a more reliable partner.”

Blue Star’s new location was originally the home of Velocity Glass, which closed after a year and a half. The closure came as Apogee Enterprises announced major changes to its business structure in the summer of 2021.

Blue Star vice president Dylan Oanono says that the move to Texas is imperative for the company to meet its goals of providing quality products with shorter lead times.

“The opportunity in Texas empowered us to quickly accomplish our long-term goals of integrating a high-speed IGU line that provides unmatched quality to our growing and loyal customer base,” says Dylan.

Dylan adds that as a private business it’s important to stay ahead of the curve as more glass fabricators consolidate under private equity and corporate umbrellas.

“We believe that being a family-run operation provides our customers and partners the highest level of service,” he says.

The shift to Dallas will benefit Blue Star’s headquarters in New Jersey, says company founder and principal Ronnie Oanono. The additional insulated glass capacity in Texas will allow the company to shift high-volume and project work from New Jersey to Dallas. It will also let Blue Star allocate more capacity to other product lines that are offered in New Jersey, such as heavy tempered glass, shower doors, complicated CNC work, laminated and tempered laminated glass and its all-glass entrance department.

According to Blue Star, the new facility in Texas will allow for:

Alex says that the new facility will allow Blue Star to grow and provide quality materials for its customers throughout the country.

“Being the only fully-automated insulated glass facility in America, we are confident that Blue Star can meet the sizes, volumes, schedules and deadlines of today’s competitive architectural glazing market, while exceeding the quality standards,” says Alex.