The Imagination Station in Toledo and a number of industry partners set out this past weekend to break the Guinness world record for the most glass bottles collected for recycling in a single hour. The group ultimately shattered the 2019 record, with a portion of those bottles set to be turned back into sand for industry use. 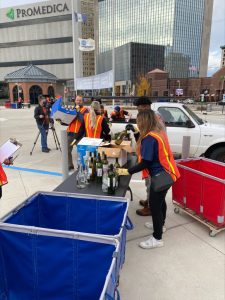 NSG Pilkington was one of the partners in Imagination Station’s attempt to break the Guinness world record for the most glass bottles collected for recycling.

According to the Imagination Station, a non-profit, hands-on science museum in Toledo, the one-hour effort this past Saturday saw more than 20,970 pounds of glass bottles collected for recycling. The previous record, set in 2019 in Spain, was for less than 5,500 pounds. Kyle Sword of NSG Pilkington, a partner in the endeavor, says numerous elected officials were in attendance as were a dozen different companies and volunteers from schools.

“We had a big line of cars and people lined up ready to drop off donations,” says Sword. “In the weeks prior, we had been collecting donations and getting those ready to be weighed in during that single hour. This is a good thing to do for the community and shows there are ways we can work together.”

Sword says the collection is a great example of necessary collaboration highlighted by the 2022 International Year of Glass.

“Toledo is the Glass City, and yet we don’t collaborate and work with each other,” says Sword. “So, this has been a nice opportunity for us to get together and work with other glass companies. One of the things that this committee at the International Year of Glass came up with is that we should do a better job collectively as a glass industry driving up recycling rates.”

He says the U.S. can also do a better job recycling all types of glass.

“If we do it right and work together, a rising tide raises all ships,” Sword says. “It won’t help us today, but long-term, if we want to have a more sustainable future, glass recycling is going to be a part of that.”

Patrick Elmore, the president of business development at Infinite Recycled Technologies, says the future of glass recycling is bright. He adds that his company has seen a significant increase in glass recycling over the past few years, led by large manufacturers and fabricators.

However, many companies remain hesitant to join the push. This is because glass recycling is expensive and time-consuming.

“The primary reason is that landfilling glass is easy and generally inexpensive,” says Elmore. “Companies can throw it in the garbage container and never think about it again. It can also be difficult to find a glass recycling company that handles architectural glass, especially laminated or insulated glass units. There’s also the challenge of training employees to segregate glass from the rest of the garbage and change processes to ensure a clean recycling stream.”

Despite the challenges, Elmore believes that glass recycling will become widely adopted in the future. In fact, he says, the adoption has already begun.

“Companies want to get more involved with where their waste glass ends up,” says Elmore. “I know we’ve only scratched the service of creating awareness of the importance of glass recycling. Our team works hard every day to meet more people in the recycling world, more companies to work or partner with, and increase the tons of glass recycled per year in the U.S.”

-Joshua Huff contributed to this article.