The number of women in construction has hit an all-time high, reports the Bureau of Labor Statistics (BLS). According to the bureau’s data, the percentage of women in the industry has steadily risen since 2016, with 14% of all construction workers now women. The BLS also reports that women make up 24% of the glass industry and glass product manufacturing workforce. 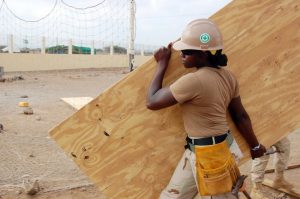 According to BLS data, the increase in women in construction is a result of the industry’s continued high demand for workers.

“We’ve experienced an enormous growth of women in construction across the board,” Rafael Villegas, executive director of the Georgia Hispanic Construction Association, told the Washington Post. “Way back when, you wouldn’t see a woman in the trades, in upper management, or even running the business. Now, women have a strong presence in every field.”

According to BLS data, the increase in women in construction is a result of the industry’s continued high demand for workers. The BLS reports that the unemployment rate in 2016 for people who had most recently held a construction job was the lowest since at least 2000. That meant recruiters had to look elsewhere from the usual pools to find new employees, which has led to a steady increase of women in trades.

“Right now, about one million women are working in the construction industry,” U.S. Secretary of Commerce Gina Raimondo said when she announced the Million Women in Construction initiative in October 2022. “I’m here to tell you that together we are going to double that over the next decade to create opportunity for another million women.”

The Million Women in Construction initiative seeks to build a new inclusive American workforce by bringing more women into the construction industry.

Though the increasing number of women in trades is a positive step forward, Raimondo says that women still face hurdles. These include a lack of women’s restrooms at jobsites and using construction equipment such as harnesses and hard hats that are made for men. They also spoke about being assigned fewer hours than the men and the lack of onsite childcare.

“It’s 2022 – it’s time to say this is no longer acceptable,” says Raimondo. “Women don’t want to deal with the BS. They just want to do their jobs. Together, we’re going to put the pedal to the metal and bring more women into the construction industry than ever before.”

Data from the BLS shows that Washington, D.C., leads the nation for women in construction with 17.6%. Arizona is second with 15.6%; Florida is third with 14.5%; Washington is fourth with 13.6%, and Oregon rounds out the top five with 13.5%. Kentucky, Wisconsin, Arkansas, Maine and Delaware round out the bottom five.

1 Response to Number of Women in Construction Industry Increasing